As of March 13,  Ryan has been missing from Laos for 10 years. There continues to be a very serious and active investigation into Ryan's disappearance: to know the truth of what happened to him and where he is now. The investigation will not end until the truth is known. For all those who love and care for Ryan we truly and deeply thank you for your support.
Judy Frane
Posted by Richard at 4:18 PM No comments:

Ryan's family and friends once again thank all those who have been so helpful and supportive in the search for Ryan. We are eternally grateful.
Posted by Richard at 6:41 PM 2 comments:

Ryan disappeared from the village of Xiengkok, Laos sometime during the evening of March 13, 2006. It has been five years, yet we still continue to search for Ryan and for the answers as to why and how he disappeared. We wish that someone in the village would come forth with the information we have been seeking.

Again, and as always, we thank all who have helped us,

As of today, March 13, 2010 Ryan has been missing from the village of Xiengkok in northern Laos for four years. We continue to actively search for Ryan and are deeply grateful to all those who support and assist us. We desperately want to find him. Thank you so very much to everyone, Ryan’s family.

Ryan has been placed on the FBI Missing Person website. There are two ways to enter this site:
www.fbi.gov/wanted/kidnap/chicovsky_rb.htm or
www.myspace.com/missingkidsusa

Ryan's family are still involved in ongoing investigations to find Ryan.
Posted by Richard at 9:19 PM No comments:

As of today, June 13, Ryan's family has not seen him in two years.

This photo of Ryan was taken by his mother in Seattle as he left for Western Washington's summer session in Bejing and Kunming, China. 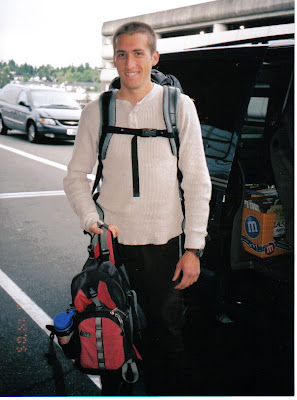 In addition, the US Embassy in Laos has updated Ryan's flyer to include information and "Large Reward" in four languages. It can be found here and on the embassy website, as listed on the left. 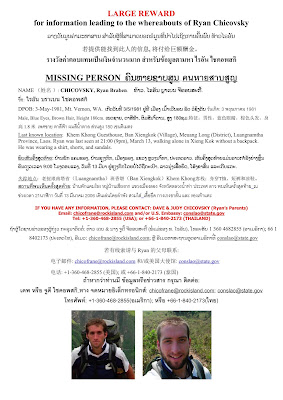 Since Ryan will now be seen by potentially many more people we have included additional photos of him. 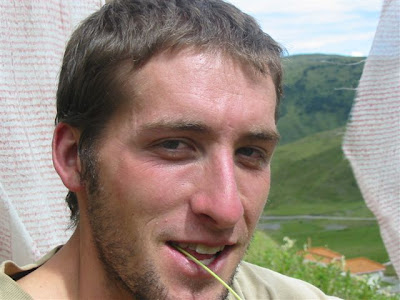 Ryan resting at The Tiger Leaping Gorge in China, 2005. 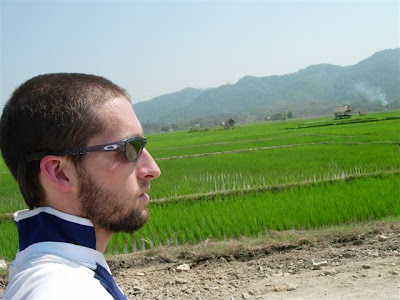 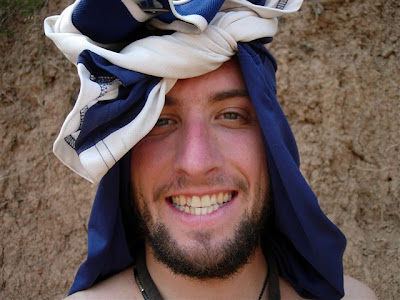 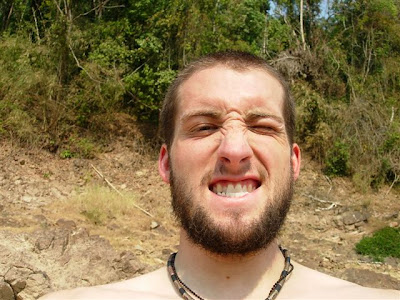 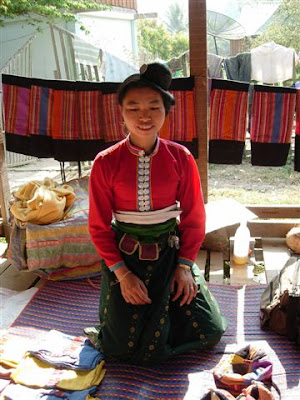 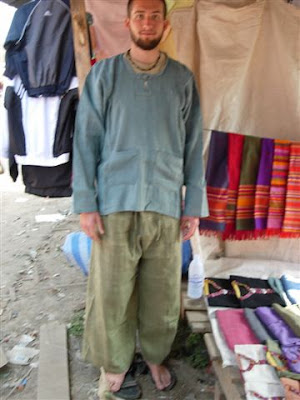 Ryan trying on clothes being sold by the vendor.
This is the last photo taken of Ryan; it is from March 13, 2006.

All these photos were taken with Ryan's camera, which we recovered. Please remember that Ryan may look very different now; he may have longer hair and a beard and he may be very thin.

We, Ryan's family, would be very grateful of any assistance in locating him. We love him very much and miss him terribly. Thank you.
Posted by Richard at 10:04 AM 2 comments:

On May 3, 2007, Ryan's 26th birthday, his family would like you to read this excellent article published in Western Washington University's Klipsun Magazine.

Missing in Laos
By Ciara O'Rourke

As David and Judy Frane Chicovsky packed to meet their son in Hong Kong, their first reunion since Western alumnus Ryan Chicovsky left for China 10 months earlier, they received a telephone call from the U.S. Embassy in Laos. Their son was missing. All of his belongings were still at his Xiengkok guesthouse in northwestern Laos, but he hadn't returned to it in two weeks.
Horrified, they left their home on Lopez Island and flew to the U.S. ambassador's home in Laos to retrace Ryan's last steps. 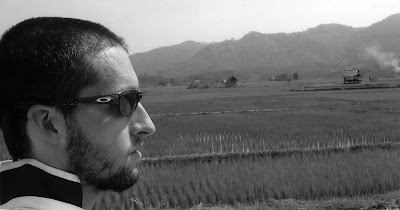 David and Judy learned through interviews conducted by a U.S. embassy team of investigators in Xiengkok that Ryan had planned to travel down the Mekong River with two other travelers on March 14, 2006.
On the evening of March 13, 2006, the guesthouse owner watched Ryan leave his room with his camera. When his travel companions knocked on Ryan's door the next morning, he still hadn't returned.
On April 7, 2006, members of the Akha tribe, an ethnic minority that lives in stilted bamboo houses surrounding Xiengkok, stumbled across Ryan's camera, room key and Western volleyball jersey 4 kilometers north of the village. Ryan was wearing the jersey the night he left the Khem Kong Guesthouse.
Despite weeks of heavy rain, the camera wasn't waterlogged, the room key hadn't rusted, and his shirt was clean.
The Akha regularly comb the Mekong riverbank and surrounding Xiengkok area for shells and treasures, but didn't find Ryan's belongings until April 7, 2006, leading the Chicovskys and authorities to believe someone recently had planted the missing possessions on the shore.

When the guesthouse owner first realized Ryan had left all of his belongings in his room, she waited until March 15 to report Ryan's disappearance to local police in case Ryan had abandoned his possessions to trek around the surrounding hills for a few days.
On March 17, the local police notified the provincial police, who traveled to Xiengkok to collect Ryan's belongings. They returned to the Luang Namtha province on March 24. On March 29, they notified the Ministry of Foreign Affairs.
The U.S. Embassy called the Chicovsky family on March 31 - three days before they were supposed to leave for Hong Kong.
"It was horrible and shocking," Judy says. "It was just so hard to believe."
Nearly 10 months have passed since the Chicovskys learned of their son's disappearance, and Ryan is still missing. They haven't seen him in a year and seven months - since before he left to study abroad in China with Western Chinese associate professor Janet Xing.
As a political science major, Ryan had not studied Chinese, but had enrolled in an introductory course as an elective during his senior year. After a year of classes, he secured a job teaching English in China, where the Modern and Classical Languages Department allowed him to travel abroad after only one year of study, Xing says.
Ryan was almost fluent in Chinese by the end of the eight-week program, she says.
"Ryan was so good," Xing says. "He was so smart. He did so well. He was one of our best students in the last few years."
At his sister Tasha's graduation dinner on June 10, 2005, Ryan broke the news to his family that he had found a job and would start working after his study abroad program finished.
"He told us at dinner," Judy says. "He said, 'I got a job teaching English and I'll be staying in China when classes are over.' We thought it was wonderful."
Ryan's friend and former roommate, Western alumnus Kris O'Hare, says it was one of "Cheeks' " - Ryan's friends' nickname for him - dreams to visit rural Asia.
"He wanted to see people at their barest and get back to the basics," O'Hare says.
When O'Hare learned Ryan hadn't returned to his room on March 13, he made the same assumption as the guesthouse owner - that Ryan had decided to travel around Laos by himself for a few days. When the U.S. Embassy issued a missing person report, O'Hare realized it might be more serious, he says. But Ryan's friends are still hopeful.
"He takes risks, but they're always calculated," O'Hare says. "He doesn't get in over his head."
The Chicovskys have traveled to Laos five times since March, the most recent trip in December 2006. But even when they're at home, they continue to search for their son and brother.
They've offered a $5,000 reward in Laos for information leading to Ryan's whereabouts. They've printed fliers to distribute overseas. Judy e-mails the U.S. Embassy frequently and spends several hours corresponding with anyone trying to help her find her son. 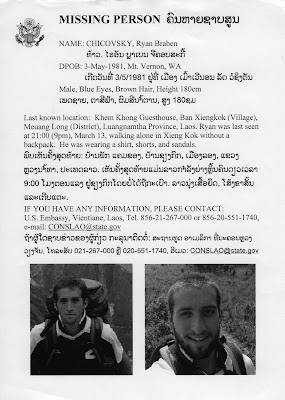 "There are people all over the world trying to help," she says. "We think he'd be amazed by what we have to tell him. All the people who are looking for him."
Kurt Jacobs and Richard Ttu, Ryan's friends from his home on Lopez Island, created a blog to communicate news concerning Ryan's disappearance to his friends and the community. The blog, "Help Us Find Ryan Chicovksy," also allows friends to contact the family.
Western senior Brian Hames, who traveled to China with Ryan and Xing, posted a message to the Chicovskys on May 3, 2006:
"To the Chicovsky Family,
I studied with Ryan in Kunming, China this last summer. Those of us who studied with him know him as "Sun" (Sun is his Chinese name, pronounced "swin"). I was devastated to hear of his disappearance and my thoughts and prayers are with you. I have told our Chinese professors about the situation and we are doing all that we can to help in any way. I truly admire Sun's passion for travel and knowledge. These past few days, I have been reflecting on all the great times we had together in China. Sun is a great person and I hope and pray for his safe return to his family and friends,
Sun, zhu ni sheng ri kuai le,
Gao Bo-hong."
"Zhu ni sheng ri kuai le" means "Happy birthday."
May 3, 2006, was Ryan's 25th birthday.
In Laos, Xiengkok residents are dismayed by the attention Ryan's disappearance is receiving, Judy says.
"It's the most significant disappearance that they say they can remember," she says.
The U.S. Embassy told the Chicovskys Laos' provincial police didn't know how to respond to Ryan's disappearance because it's such an unusual crime in the province.
Besides its inexperience, the police force also lacks supplies. Most officers traveled by foot because the force owns only one truck for the entire province. The Chicovskys paid for the force's food, gas and lodging when they traveled to Xiengkok to look for Ryan.
Even though his family and friends still haven't heard from Ryan, they refuse to give up their search.
"You'd never count him out until you knew for sure," O'Hare says. "He's just one of those guys."
Using the photographs they recovered from Ryan's camera's memory card, the entire family - David, Judy, Tasha and Ryan's brother Keenan - has been able to visit some of the villages Ryan captured before his disappearance. David and Judy have interviewed local residents in the photographs, many of whom are reluctant to talk.
"They have said they don't know anything, but it's hard to believe," Judy says. "Someone knows something."
Others, such as the girls Tasha and Judy met in the Hmong village, remember Ryan fondly.
"Some of the little girls said they remember Ryan because he went to their school and gave them pencils," Tasha says. "They were pretty excited."
As Judy sifts through a stack of photographs she stops at one of Ryan attending a market that takes place on the full moon, leading up to the Buddhist New Year. She visited the fair, buzzing with activity, on one of her trips to Laos.
The next picture Ryan took of himself, a wide smile on his face, his head wrapped in his Western volleyball shirt.
"When we traveled to Laos we realized why he went there," Judy says. "It's a beautiful country and the people are wonderful. The air is clear and there's practically no industry. Ryan wanted to experience Southeast Asia as it might have been 40-50 years ago."
From Lopez Island to Laos, Ryan's family and friends echo the same message. Help us find our missing son. Help us find our missing brother. Help us find our missing friend.
Help us find Ryan Chicovsky.
Posted by Richard at 10:19 AM No comments: